It’s OK to be angry.  Many people are walking around right now who are angry and frustrated with their lives for whatever reason. And when you travel the journey of heartbreak after a breakup or divorce, you will hit the angry button one day, guaranteed. If you don’t already have good practices around dissolving your anger, you will suffer the volcano effect and create more damage in your life. Here are 3 ways to control your anger safely and effectively.

We are taught at a very early age to be quiet, don’t make a fuss, don’t complain about anything. Girls are primarily targeted for this behavior modification. We are told:

– good girls do as their told

– be considerate of others

I realize that perhaps to some degree, I’m speaking about a particular generation. However, with all the girl empowerment we see in the millennial generation, females are still getting the message that we aren’t allowed to have or display big emotions. This has led to a generation of women with thyroid disease and chronic migraines.

Here’s the thing; when you are recovering from your heartbreak you will travel the 3 Phases of Heartbreak as discussed in the Heartbreak Survival Guide. In Phase 2, you will encounter Pain and Anger.

Sometimes your heart needs more time to accept what your mind already knows. When you are in Phase 2 of heartbreak, your chest tightens and aches, you have shortness of breath, weakness, headache and neck ache. Generally, the areas around your chest and head have the reaction.

A study in the New England Journal of Medicine concluded that the same area in your brain that registers social rejection registers physical pain. This is how your anger manifests into physical pain in your body. Heartache anger hurts.

And this is when we self-sabotage to soothe the pain. We resort to drowning your sorrows and anger in bottles of wine or tubs of ice cream. You think you’re doing something good for yourself, but in fact, you’re telling your body to continue to operate as if you are in threat – fight or flight. More inflammation and internal damage ensue.

After years of stuffing down your feelings, you tend to fall back into those habits that seemingly protect those around you. Not only are these habits toxic to yourself, but when you shove down your feelings, you’re affecting those around you as well. Our energy is not contained and is sent outward from our body like an ooze or fine mist undetectable to the naked eye but easily felt.

You know what it feels like when your boss is angry, or your friend is upset? I’m sure you have felt someone shoot darts at you from across the room. That’s the energy that you spread to everyone you come in contact with when you are angry. It’s toxic to them and to yourself.

WHAT FORM DOES YOUR ANGER TAKE?

To further illustrate, let’s have a look at “Thought Forms” the seminal book on thoughts as energy, written in 1901 by Annie Besant and C.W. Leadbeater.

Theosophists, Besant and Leadbeater, explain in detail the colors and forms that specific thoughts make when a person is in a particular emotional state. They claim that when we produce a thought, it comes out based on the quality of the thought, the nature of thought, and the definiteness of the thought. For example, here’s an illustration of what murderous rage and sustained anger look like. 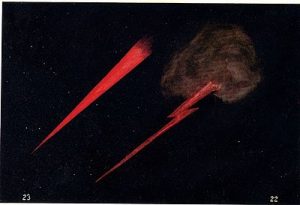 “The first form was taken “from the aura of a rough and partially intoxicated man in the East End of London,” when he was knocking down a woman; a flare flashed in her direction, triggering an explosion of horror—she recognized that one would be struck. In the same illustration drawn a “stiletto-like dart” directed to the lower-left corner: it is a thought “of steady anger, intense and desiring vengeance, of the quality of murder, sustained through years, and directed against a person who had inflicted a deep injury on the one who sent it forth.”

I find this fascinating and so true. I have witnessed similar forms of energy come out of clients, especially on my table during a Reiki Session. Now imagine if you had safe ways to dispel that anger before it becomes dangerous thunderbolts of energy.

Our society doesn’t allow for explosions of rage and anger. It’s seen as disturbing to those around you, and it is of course, especially, when it comes out for no apparent reason. This is the “volcano effect.”

The volcano effect is when you shove down an initial reaction of anger or sadness so much that by doing so you think you’ve dealt with it. But all you have done is to simply banish it for a time into your subconscious where it awaits lurking and waiting for the next emotional upheaval to exploit. Then you explode emotionally, releasing all the past hurts that have been festering like a putrid ooze. Yes, I have seen this.

It isn’t good for you or for society. So, let’s change that with 3 very effective ways to quickly dissolve your anger, anytime and anywhere you have an episode.

Say the mantra “Sham.” Vedic healers have to centuries used the Sanskrit word “Sham” to activate the Third Eye Chakra. It not only activates your intuition but your ability to see things and situations more clearly. When you are in anger, the Third Eye becomes clouded. You’ve heard the saying, “Seeing red” to describe anger. Well, by saying the mantra “Sham” while focusing on the color purple/blue, you can help to calm the “red” instantly.

This will also relieve the pain forming in your frontal lobe as a result of your anger. Do this in your shower in the morning or in the bathroom of your office. Close your eyes, focus on seeing purple/blue in the center of your brows and say “SHAM” in a high tone feeling the vibration on your forehead.

Exercise. But not just any exercise. Big explosive exercise like going for a run or hitting a ball with a tennis racket up against a wall. Or going for a vigorous walk up a steep hill. Boxing is also great, as long as you don’t over-due it and send that energy back into yourself and create damage.

When you have picked your favorite exercise, focus on releasing the angry energy from your head out through your exhaling, until it’s all gone.

Throw a tantrum. I call this “tantrum therapy.” It’s one of my favorites because it directly targets and allows you to release all of those past hurts that have built up over the years. When you are triggered and if you have the chance to address it right away in your own home, then great. But if you’re at work or out,  and you feel the anger, take a few deep breaths to control it. Then as soon as you get home, do this technique.

Go to your bed or if you have a very comfy wide sofa or extra thick carpet. Lay down with arms and legs spread out and start to pound your arms and legs as if you are going into a childlike tantrum. You can scream, say whatever words you want as long as you are alone.

Anger will always happen when you have spent years shoving down your feelings. Years of believing that you have no say in the matter will create a pattern of worthlessness and self-sabotaging behavior. This self-sabotaging behavior will ensure you pick the same partners again and again and will guarantee that you stay in anger. Let’s stop this now by practicing these 3 ways of dissolving your anger safely.

For more coping tips, join me over in the My Life Crush Facebook group.

« Who Needs Enlightened Sex?
How Your Master Love Language Rules Your Life »