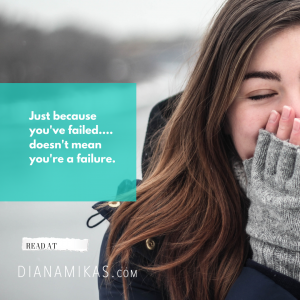 When you fail at your love life, it can either stop you from moving forward or it can propel you to learn how to do better. If you don’t take on the learning, it can stop you from living the love life you want… I know this one is a struggle because we all do it to some degree. But I want you to remember that just because you’ve failed…doesn’t mean that you’re a failure.

We all have to contend with it at various junctures in our lives. It is easier to overcome when it relates to just one aspect of your life, like your job or playing a game. You might fail at one thing, but you know that the rest of your life is good, so you don’t let it affect you so much.

When you fail at love, this can be devastating because it affects your core being of who you are… and you may decide that you are “unlovable”.

This way of thinking can stop you from living the love life of your dreams or it can propel you to figure out how to change it.

I have found there are two camps of people….

First, there are the believers.

The believers are great at taking what happened to them and believing that it means something very profound about the way their lives should be lived.

These are the people who will go through life thinking that they have no control, what-so-ever, over the major things that happen in their lives.

You will hear them saying, “Well, I guess I wasn’t meant to get that job anyway.” Or “I guess this is my cross to bear.” Or my favourite, “I made my bed, now I have to lay in it.”

And they often to refer to family behavior as if they were born a certain way and now they have to live with it… “ I was born that way”.

They stand in these beliefs as if they were stuck in a mud puddle and can’t get out. And they don’t even try. Resignation becomes their new norm.

“unlucky at love”, “untalented at figuring it out”, “unworthy of success”.

They convince themselves that they shouldn’t even try to figure out another way, because why bother, they will never succeed.

It’s a dead end at every turn of their lives, so they stay in the safe box that they’ve made for themselves. This way they don’t even have to risk anything for a better life…. For a better love life.

Second, are the challengers

This group of people, don’t take “no” for an answer.

Somewhere along the way in their lives, they observed that asking questions and getting more information about a dilemma resulted in a different answer or perspective. Which gave them another opportunity to approach a problem from a different angle and get a more desirable answer.

And so, they’ve taken this event, and understood that they have choices in an undesirable situation. They refused to believe what they were told and found another path to solve it.

As a result. they get more favourable outcomes towards their goals. And the most important part of their challenging behavior is that even if they fail, they don’t take “no” for an answer.

And they never give up because they know that their lives mean more.

If Meryl and Serena can do it…

Imagine if Meryl Streep believed what Dino Delaurentiis Sr. said about her – That she was too ugly to be in King Kong. Imagine if she took this to heart and decided that she wasn’t worthy of acting period.

She challenged this statement, continued towards her goal and went on to become one of the most celebrated actors of our time.

If you understand the life of an actor, then you know that they get rejected all the time for various reasons. The ones that succeed are the ones that never gave up on themselves, they kept learning to be better. They surrounded themselves with mentors and acting coaches that helped them break through the negative self-talk.

What about the pro – tennis athletes – the Williams sisters? They didn’t become pro because they were mediocre or quitters or believed that just because their skin colour didn’t match other tennis athletes that they shouldn’t be the best.

They too struggled to push through their failures, much racism and worked very hard to become the greatest tennis pros of all time with Serena now owning the open era record for Grand Slam singles titles by a tennis player, male or female. Just because they failed, didn’t mean they were failures.

What’s the one thing these two women had in common? They had supportive people around them helping them push through these limiting scenarios.

But they also, quickly and diligently worked toward reframing the beliefs others were throwing onto them and challenged society and their minds.

If they wanted to reach their goals, they understood that they had to fail often. Or “Fail Fast.” Because it’s only through our failure that we see the path to success.

When you fail at love, it is devastating. I won’t pretend that heartbreak isn’t painful. However, you have a choice to allow it to cripple you now and for all future relationships by believing the story that you’re a failure at love…

Or you can challenge this thinking and realize that the failure was a good thing… a lesson to be learned in order to do better next time.

I can’t stress this enough; Just because you’ve failed…doesn’t mean you’re a failure.

So, I’ll tell you what my acting coach used to say when I failed.

You can’t succeed without failures.

Now, let’s figure out why you failed so that it doesn’t happen again…xo