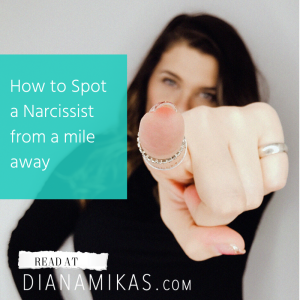 I consider myself an expert on narcissistic behavior disorder. My credentials include being the daughter of a narcissistic mother and then picking a narcissistic now ex-husband. These two fundamental love relationships allowed me to become acutely aware of  narcissist energy – from how they love bomb to how they use manipulative language to keep you hooked. Now I want to teach you how to spot a narcissist from a mile away.

If you spot it, you got it

Here is how you can identity a narcissist on Tinder!

If you’ve been involved with a narcissist, the chances of you picking another one is very high. Pay attention to the love bombing and the words they use to keep you hooked. You will quickly be able to spot a narcissist from a mile away.

Still not sure if your in a relationship with a narcissist? Let’s talk.